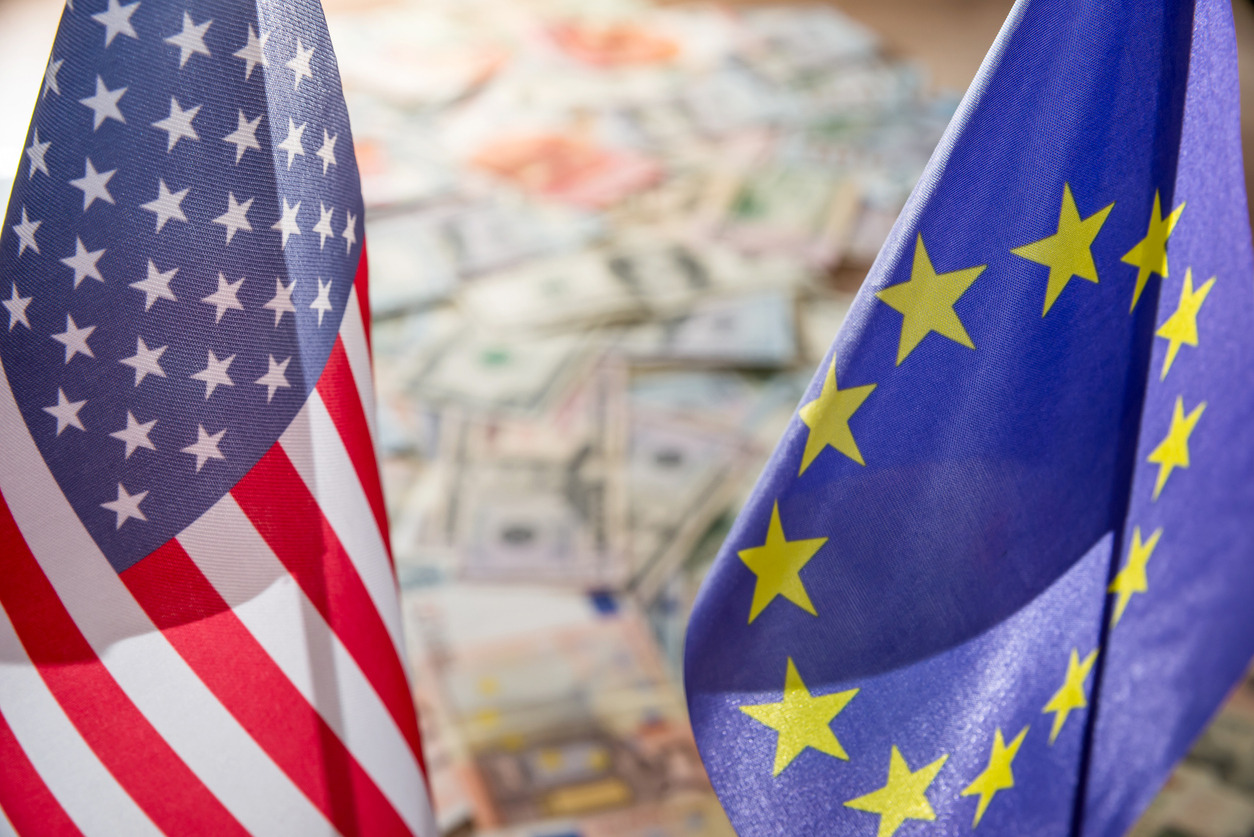 We chart the diverging fortunes between the US and the euro area.

By
Julius Probst and Nicolas Tremel

Macrobond economist Julius Probst and guest blogger Nicolas Tremel, a macro economist and strategist, chart the diverging fortunes between the US and the euro area, along with the outlook for both regions in 2022.

*Some of these charts use revision history data, which is only accessible with a Macrobond Data Plus license using the new 1.25 version.

The US economy has seen a very strong recovery over the last 12 months. Unemployment has already fallen below 4.5%, a low achieved only three times in recent decades: the year before the dot-com bubble, the year before the global financial crisis and at the end of Trump’s term.

The prime employment-to-population ratio is also increasing strongly; nominal GDP has fully recovered and is exceeding its pre-pandemic trend. Household disposable income, retail spending, monetary aggregates and inflation are now all above trend. Fair to say that the US is experiencing a mini-boom and that monetary policy has to tighten or there will be a risk of higher inflation.

On the back of the somewhat unexpected economic boom, US GDP forecasts were revised upwards in the last 12 months. Looking at International Monetary Fund forecasts below, you can see that just one year ago, economic growth was expected to come in much lower for the years ahead. In fact, real GDP growth revisions exceed 2%, both for 2020 and 2021.

US unemployment revisions have also been substantial. Just a little over a year ago, institutions such as the IMF or the Federal Reserve would not have imagined that the unemployment rate could drop back to 4% that quickly; best estimates at the time suggested a rate of close to 6% for today.

The US is one of the few countries that has fully recovered from the huge drop in GDP that happened last year, whereas the economic situation in Europe is not looking quite as bright.

Continental Europe is suffering from yet another severe wave of Covid-19. Vaccination rates in German-speaking countries have been relatively low while Austria had to return to full lockdown this winter.

With less monetary and fiscal support in the euro area, forecast revisions have been much smaller. The delta between the October 2020 and October 2021 forecast for the current year is actually negative, whereas the growth forecast for 2022 has been revised upwards by a little over 1%.

The forecast revisions for euro area unemployment are also much smaller than in the US, suggesting a weaker labour market.

The economic divergence between the US and euro area also has implications for financial markets and asset prices. Markets are now pricing in several rate hikes throughout 2022/2023 amidst surging inflation in the US. Fed funds futures suggest three interest-rate hikes by January 2023 and some six 25bps hikes by January 2024.

Last month, the Fed announced at its press conference that it will accelerate the tapering of its asset purchase program and end it by March 2020. Moreover, Fed policymakers now expect to increase rates to more than 2% by 2024.

Inflation reached a record high (6.8% year-on-year for the US and 4.8% for the eurozone) but was drastically under-estimated, generating the strongest inflation surprises in more than a decade.

Moreover, this inflation was initially expected to be temporary but appears to be more persistent.

Despite the emergence of highly efficient vaccines, Covid-19 is still creating strong uncertainty.

The Omicron and Delta variants have disproportionally affected countries with low vaccination rates. A solution of last resort would be to drastically increase lockdown stringency measures. Omicron is already triggering more supply chain disruptions, which should continue to support inflation expectations.

Central banks have started to tighten their monetary policies to limit this robust and more sticky inflation. However, they are expected to move at different speeds according to their own specific constraints.

We already mentioned that the Fed will accelerate tapering and hike rates.

The European Central Bank remains more cautious and is in no rush to make a decision on rates as it focuses on growth.

On the other side of the spectrum, the Central Bank of the Republic of Turkey (TCMB) is pursuing lower interest rates at all costs to expand the economy and create jobs.

Due to a more hawkish Fed, the dollar effective exchange rate remains extremely strong versus a basket of currencies like the euro and the Turkish lira.